Bull Ants Bites And How To Prevent Them

Ants are some of the most common insects you can find around. It is estimated that they can make up about half of the insects’ population in a particular location. You will find ants at home, in your garden, yard, or even pool. Ants like living in warm areas, which is why you tend to find them at your house. Moreover, they infest homes looking for something to feed on.

Ants also live in structured nest communities that you can find in trees, in-ground level mounds, and underground. There are many species of ants around the world. One of the species is the bull ant. This article will delve into bull ant bites and stings, but before getting deep into that, let’s look at some critical aspects of this species.

How Can You Identify Bull Ants? 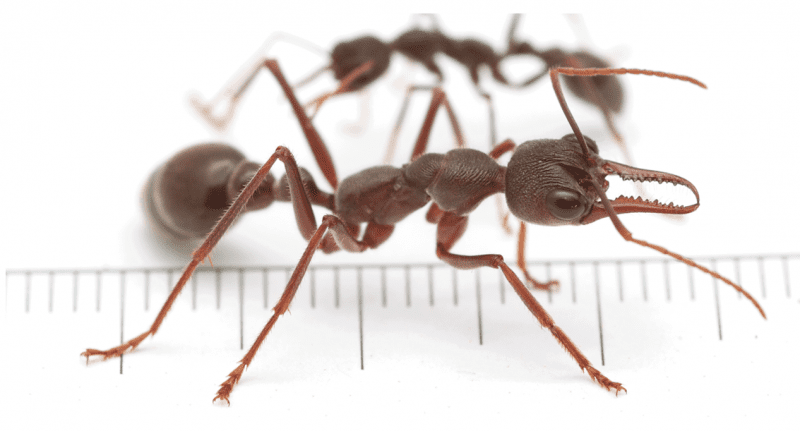 You can quickly identify bull ants by their large bodies. They are large and can grow to about 40 millimetres. They are characterised by big eyes, long slender mandibles, and venomous bites or stings. Unlike most other ant species, bull ants have superior vision and can track their enemies or even other intruders from a distance of at least one metre.

Most species of bull ants have orange or bright red colours on their abdomens and heads. They have different life cycles and behaviour. Some of the small species are referred to as jack jumper ants. Their name is based on their aggressive jumping behaviour towards intruders.

Where Can You Find Bull Ants?

Bull ants mainly inhabit woodlands, urban areas, and heathlands. They are the biggest ants in Australia, with only a few species that rival them in size in other parts of the globe. They have a fertile queen whose sole responsibility is to lay eggs. The infertile workers perform all the work needed to help keep the colony alive. Fertile bull ants usually have wings and get out of the nesting place to start new colonies.

Bull ants usually collect nectar and other plant liquids as part of their diet. They also prey on other animals that they carry to their nesting places. They like eating protein-based foods that primarily include other insects. In addition, they like fruits and seeds.

Adaptation And Behaviour Of Bull Ants

Bull ants usually live underground and have small hidden entrances. Their nests extend a few metres underground. They usually attack all intruders regardless of their size because they do not like finding strangers near their nests. Their well-developed vision means they can follow strangers and even chase them several metres from their nesting place. In most cases, the sight of these giant aggressive ants coming out of the nest can cause a hasty retreat to any intruder.

Bull ants have painful bites. To sting, a bull ant grips its enemy with its strong mandibles, curls its abdomen to reveal its sting, and injects its venom. Their colonies tend to be small, but the queen usually invades other colonies, taking them captive and killing their queen.

Bull ants are active during the day and night. The workers usually forage for long distances alone instead of moving in trails, like other ants. They gather insects by overpowering and stinging them.

Bull ants are aggressive and tend to give a painful bite. When bitten by a bull ant, you can apply an ice pack or any other approved spray to relieve the pain caused by the bite. In case you develop an allergic reaction from its bite, you should seek immediate medical attention.

The Developmental Stages Of Bull Ants

The queen of a particular bull ant colony starts to mate and digs a hole in the nesting place to lay eggs. The eggs go through the various phases from an egg to larvae, then pupae, and finally adult. From the egg to the adult stage, it usually takes three to four months. Bull ant babies are referred to as larvae. They are small white grubs that are hidden deep in the nest. They are cared for by the workers as they grow.

For food, paralysed and dead insects are brought to the larvae to eat until they grow up to the pupa stage. Bull ants usually pupate in a brown-like cocoon or case. When they emerge, they are fully grown but lighter in colour than the already mature bull ants.

Now that you know some of the essential facts about bull ants, it is time to focus on their bites and stings.

The Sting And Bite Of A Bull Ant

The queens and workers of a bull ant colony usually deliver painful bites. The pain can last for about five minutes. The bite from the ants is not like those of most other types of ants in terms of severity and venom delivered. Bull ants can bite you several times because, unlike bees, the sting is not left on your body. This also means that the ants do not injure themselves after they bite you.

The sting of a bull ant is usually located in its abdomen and is attached to one venom gland connected to the venom sac. The sac contains the venom delivered to its victims. Workers of larger species of bull ants have very potent and long stingers.

When Do Bull Ants Bite Or Sting?

Generally, bull ants tend to display highly defensive characters near their nesting places. However, they are also more timid while looking for food or feeding. They tend to be aggressive when intruders approach their nest. The workers usually go back to the nest instead of attacking the intruder. If the nest gets disturbed, an army of workers gets out of the nest to attack the intruder.

Jumper ants can jump many inches when they get agitated after their nest is disturbed. They usually propel their jumps by instant extension of their hind and middle legs.

How Does The Sting And Bite Of A Bull Ant Affect Humans And Pets? 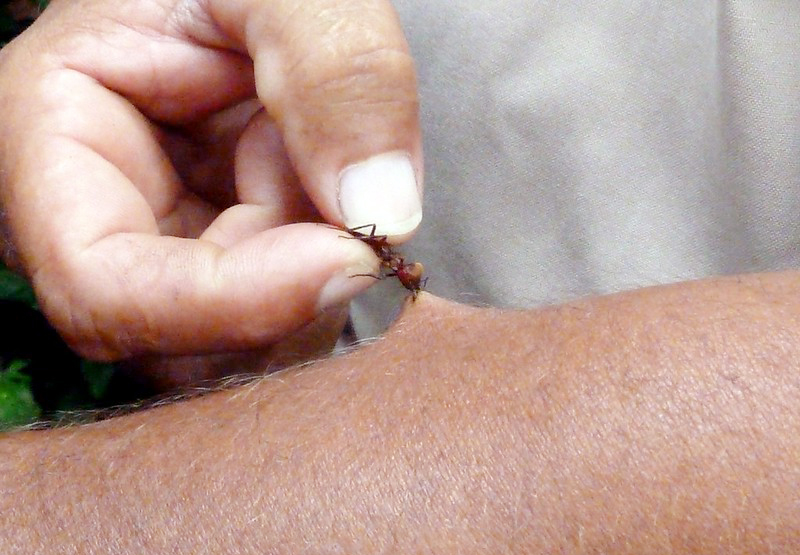 The sting of a bull ant can cause several health issues to you, including death due to the venom. The most common problem resulting from the ant sting and the bite is allergic reactions. The intensity or type of allergic reactions depends on your body’s sensitivity to the bull ant stings and bites.

Each species of bull ants has distinct venom components. You are advised to stay away from bull ants if you have an existing allergic condition to their sting. The toxicity of their venom has evolved due to intense predation by birds and animals during the day. It is not only humans who are affected by their bites and stings. Dogs and other pets also develop allergic reactions from these bites.

How To Prevent Stings From Bull Ants

It may be hard to avoid encountering bull ants, making it easy for you to get stung or bitten. A high risk of getting bitten is when you are gardening and you are unaware of the presence of bull ants in your garden. However, you can prevent their bites and stings by:

How To Identify The Bite Or Sting Of A Bull Ant

It is easy to recognise a bite or sting from bull ants. Unlike other ants, the bite is painful, which means that you can recognise it immediately. It is also worth noting that bull ants are large, so you can easily see them. A bite from a single ant can cause you immense pain. Bull ants also inflict several bites or stings without running away as they do this trying to defend their nests.

What To Do After A Bull Ant Bites You

The severity of a bull ant’s bite determines the action to take. If you experience severe allergic reactions, you should seek medical treatment immediately. Some of the signs you may experience that require immediate medical attention include:

If the effects are not severe, you can treat them using the following steps:

How To Eliminate Bull Ants From Your Home 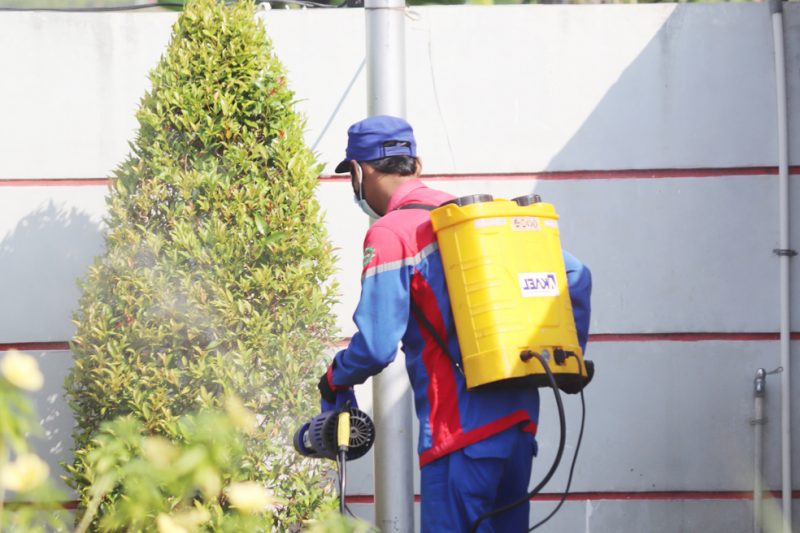 The best way to ensure that you do not get bitten or stung by a bull ant is to eliminate the insects from your home. Here are some of the steps to follow to get rid of the bull ants:

Bull nests are located underground. However, you can also get them under rocks and rotten wood. Their nests are usually simple at first but become prominent as they increase in population. So, at first, it can be hard to notice them. However, you can quickly notice large mounds of dirt with a small opening on its top after the colony expands.

If bull ants feel threatened, they attack and bite or sting. To avoid being bitten or stung, it is always wise to check for their nests from a distance. Be sure to choose the best extermination method.

You can use sprays and baits as a DIY control. This is an effective method because the ants eat the baits and take them to their queen. This method also ensures that you do not get too close to the bull nest, enabling you to avoid bites and stings.

You should try as much as possible to avoid being stung or bitten by a bull ant. You do not want to go through pain or experience an allergic reaction after being bitten. Make sure your home or garden is free of these ants by ensuring that they do not build nests around your home. For long-term solutions to bull ants, hire a trustworthy ant control company to keep your home free of these insects.