What’s The Most Poisonous Spiders In The World?

Whether you are in your house, relaxing in the backyard, or taking a walk outdoors, you are likely to see a spider. Spiders vary in different aspects depending on the species. It is estimated that there are more than 40,000 types of spiders worldwide. With this high number, it makes it challenging to determine which spiders are harmful or harmless. Some spiders are more dangerous than others. If you are not yet aware of them, below is a list of the most dangerous spiders in the world. Be cautious of these spiders because their bites can prove deadly for you.

Brazilian wandering spiders resemble North American wolf spiders but are bigger. Their venom is the most toxic, making them the world’s most poisonous spider. Besides, they travel a lot and are very active hunters. You will find them in flowers and on fruits, and they love crawling into cosy places at night. Therefore, be extra vigilant if they are common in your locality.

When provoked, the Brazilian wandering spider bites as a way of protecting itself. The spider gets aggressive when pressed against something, for instance, between cloth and skin. A high amount of serotonin in their venom causes a painful bite that leads to muscle shock. Death can occur a few minutes after being bitten and even after antivenin treatment. Kids tend to be more sensitive to the bite due to their weak immune systems. 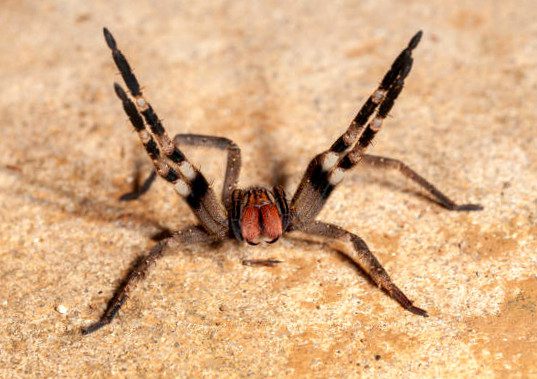 A black widow spider is generally identified by a bright hourglass-shaped mark located on the abdomen. Black widows are mainly found in temperate regions. In homes, you can find them around plumbing, woodpiles, and heating systems. About 5% of their bites are fatal. If bitten, you are likely to experience nausea and muscle spasms. If severe, diaphragm paralysis may occur, leading to breathing difficulties. To understand how poisonous black widow spiders are, their venom is said to be fifteen times more powerful than a rattlesnake’s. Bites are mostly fatal for the young and elderly. The spider only bites in self-defence, being naturally nonaggressive. 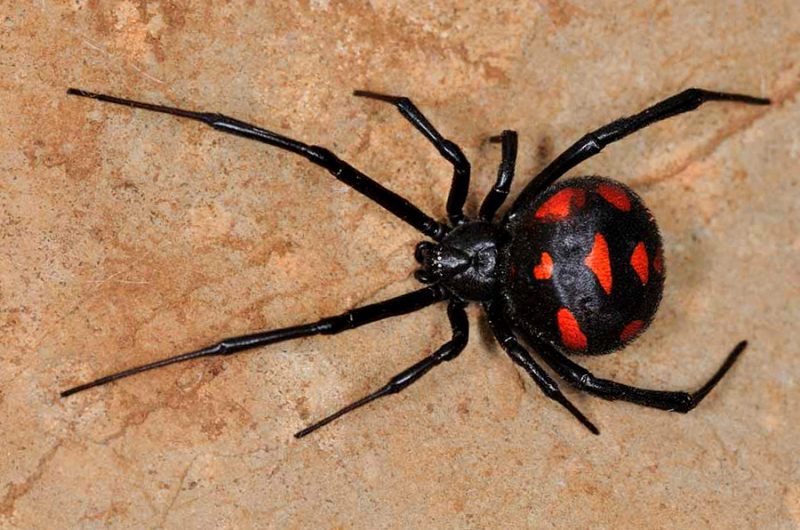 Brown widows have neurotoxic venom that triggers latrodectism characterised by muscle spasms and unbearable pain. The spider is closely related to other species, such as katipo (an increasingly rare poisonous spider native to New Zealand) and the deadly black widow. Like most other spiders, brown widows have poor vision and therefore experience difficulties moving outside the web. Their globular abdomen features one or several red spots either below or above. The spot(s) may be comprised of many dots in a row or take the form of an hourglass.

Females are bigger than males and also more dangerous. They bite when threatened, or their web gets disturbed. Their venomous bite is not only painful but also potentially causes cerebral or spinal paralysis. Though the paralysis lasts for a short time, it can result in long-lasting damage to your central nervous system. The effects are far worse for kids and the elderly. A severe bite leads to hospital admission. 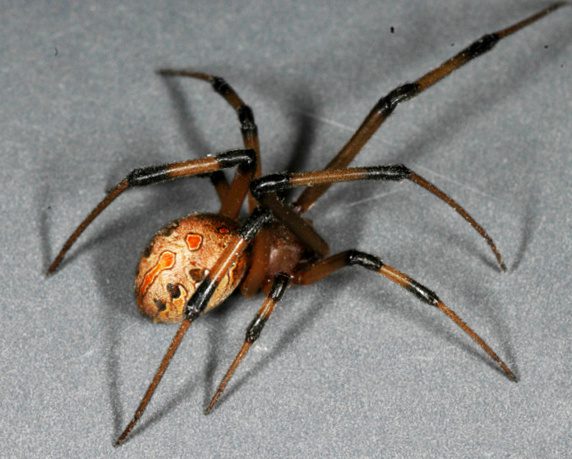 Due to a dark violin-shaped marking on the head, the brown recluse spider is also known as a fiddle back, fiddler, or violin spider. The spider moves slowly and likes operating in the dark. You are likely to find this spider in clothing, footwear, and bedding. Hiding in such places gets it pressed against your skin, leading to a bite. Brown recluse spiders are no joke because their extremely venomous bite causes massive tissue loss. 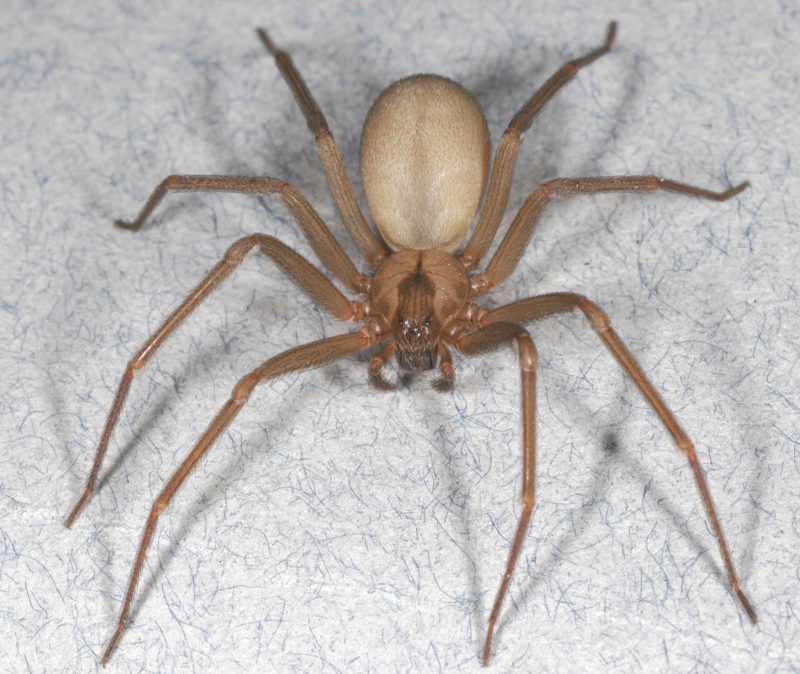 Mainly found in sandy places, especially deserts, the six-eyed sand spider is medium-sized, measuring around one to two inches. Its legs span up to four inches long. These spiders are closely related to recluse spiders. Despite their poisonous nature, they rarely bite. But when they do, the toxic bite is fatal within five to twelve hours. Severe bite effects include blood thinning, tissue destruction, and blood vessel leakage. 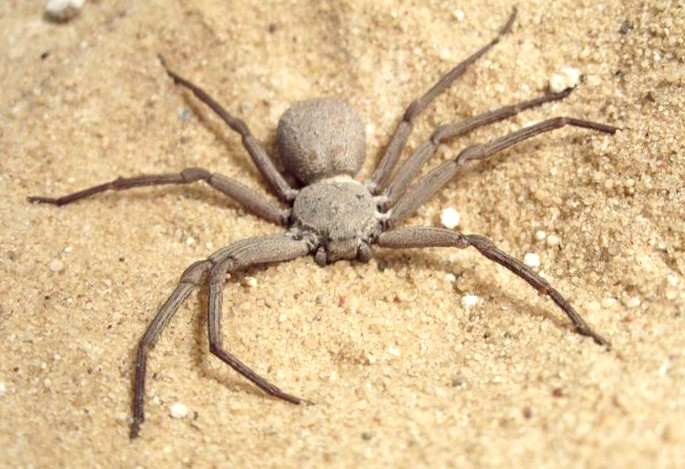 Among recluse spiders, the Chilean recluse is the most poisonous spider. That is because its bite is so potent it can lead to fatality. The spider is nonaggressive but bites when touched or trapped. Its venom contains a dermonecrotic agent that causes necrosis of the skin. In extreme cases, a bite can cause severe lesions or even renal failure. 4% of bites are deadly. 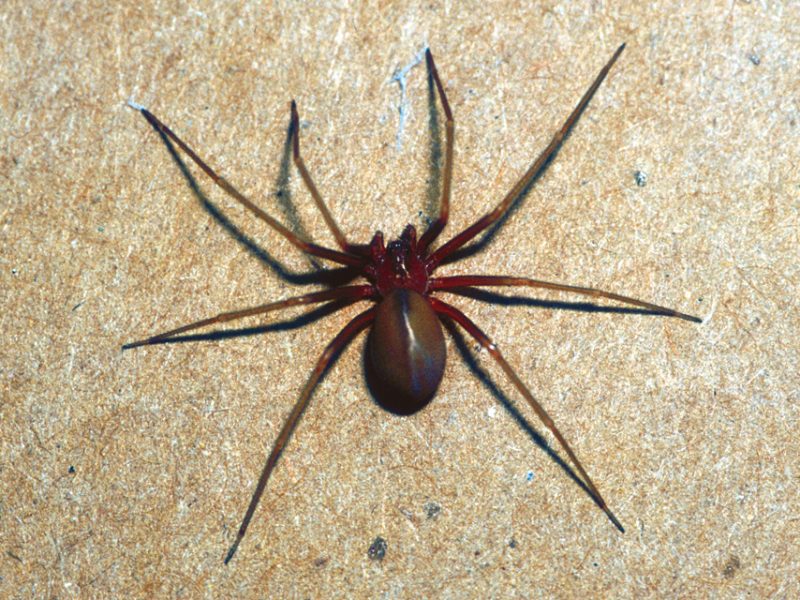 The northern funnel-web spider grows to a length of about three inches. Such spiders are easily identifiable because they tend to stay in trees. They also love inhabiting places with water. So, you can find them around your swimming pool. Their venom can kill humans within a few minutes if anti-venom is not provided promptly. That makes them one of the world’s most poisonous spiders. 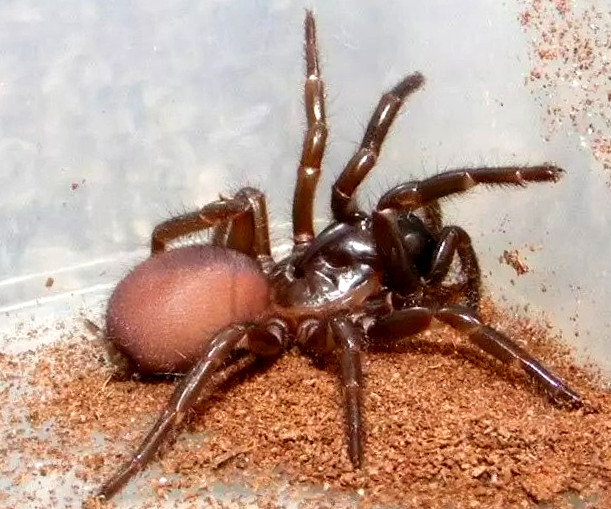 Measuring one to three inches long, the Sydney funnel-web spider is among the deadliest spiders on earth. It is very aggressive when rattled and will readily bite. Most of the time, females retreat in silk-lined tubular burrows. During warm months, males are regularly in pursuit of receptive females.

The venom of Sydney funnel-web spiders contains atracotoxin, a very toxic compound. When the spider bites, it delivers full envenomation due to its large fangs and strikes repeatedly because of its high-level aggressiveness. Therefore, avoid approaching such a spider because there is a high risk of getting bitten. A child can die within fifteen minutes of a bite since the venom gets quickly dispersed throughout the body. 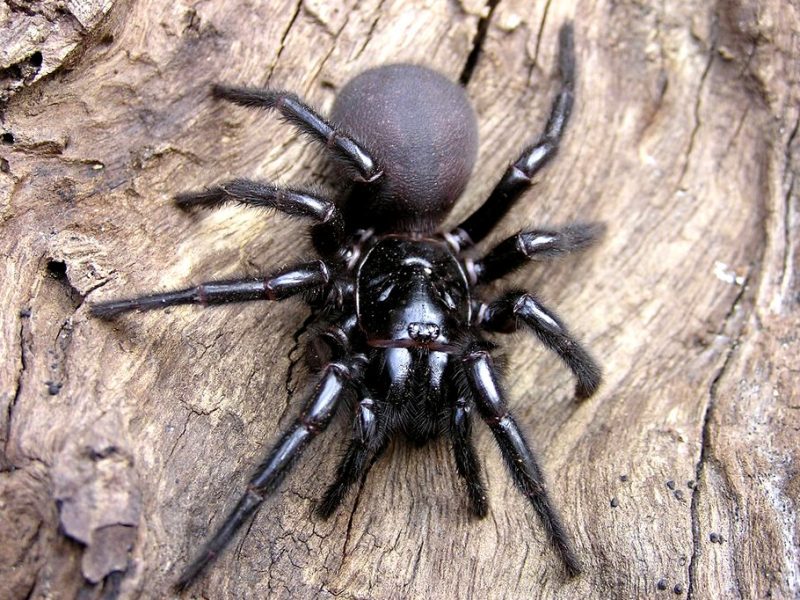 Wolf spiders measure one or two inches long. Their body is hairy and coloured grey or brown. They have eight eyes arranged in three rows – at the bottom are four small eyes, in the middle are two large eyes and at the top are two medium eyes. Unlike most other spiders, they do not weave webs. But they are aggressive hunters.

Despite being extremely poisonous, the venom of a wolf spider is not that lethal. The spider bites or moves away fast when it feels it is in danger. When you get bitten by this spider, avoid bandaging the bite site. Instead, place an ice pack on it to minimise swelling. And keep calm. 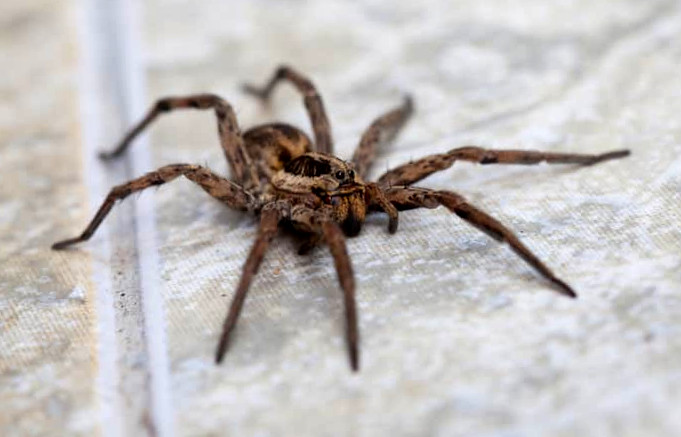 Such spiders are rare but very venomous. They are colourful and less than one inch in length. It takes one to three hours for their bite to take effect. Common symptoms include muscle cramping, severe pain, nausea, hypertension, sweating, and vomiting. 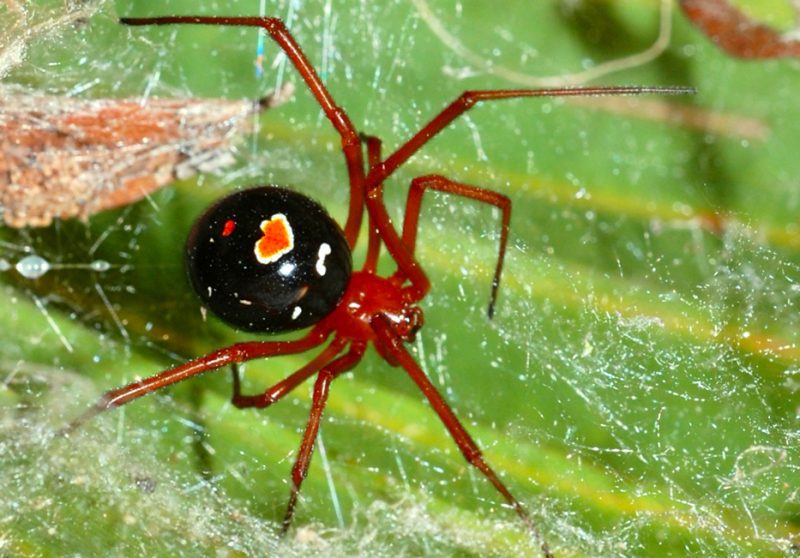 What To Do When Bitten By The Most Poisonous Spiders

When bitten by a poisonous spider, get to a hospital or call your doctor immediately. Most spider bites lead to life-threatening reactions. Acute symptoms include increased heart rate and blood pressure, which cause severe complications. Children, those with health issues, and the elderly are at high risk of severity. If possible, have spider anti-venom at home, which is highly advisable if you live in an area infested by toxic spiders. Overall, preventing spider bites through spider control by a pest control company is the best remedy.